Happy International Women’s Day 2019!
In its interactive, slideshow Doodle is told by and made by women. In it, the search engine giant showcases inspirational quotes across various languages by thirteen international female trailblazers—both past and present. Connecting to the larger theme of “women empowering women,” the quotes were also designed by a talented group of female guest artists from around the globe.
“The process of choosing the thirteen quotes was extremely difficult, but we aimed to include a diverse representation of voices on a day which celebrates the past, present, and future community of diverse women around the world.”-said Google Doodle team.
https://www.google.com/doodles/international-womens-day-2019

Based in the United States, American illustrator Melissa Crowton created the multilingual opening and closing images in today’s Doodle.

Q: What inspired your approach to the images you designed for the Doodle?

A: Although it is often hard to communicate so much in one image, I was inspired by the diversity of the women of the world and wanted my image to reflect that. Each element is unique in shape, texture, and size, which I found to be an apt representation of the beauty of our community.

Based in Brighton, UK, British designer and illustrator Kate Forrester created the design below. 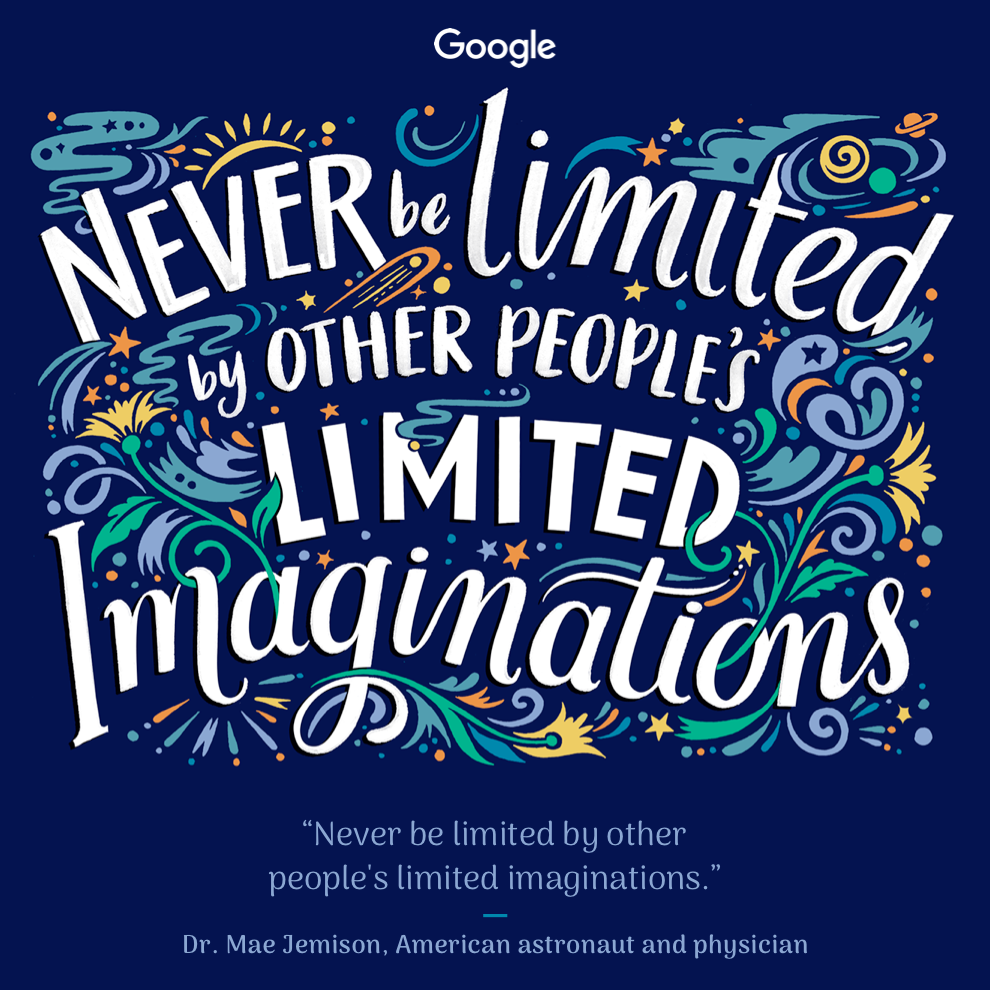 Q: What does International Women’s Day mean to you personally?

A: It is a chance to celebrate the progress we have made and consider what is yet to change for the better.

Based in Munich, Germany, German designer and lettering artist Rosa Kammermeiercreated the design below. 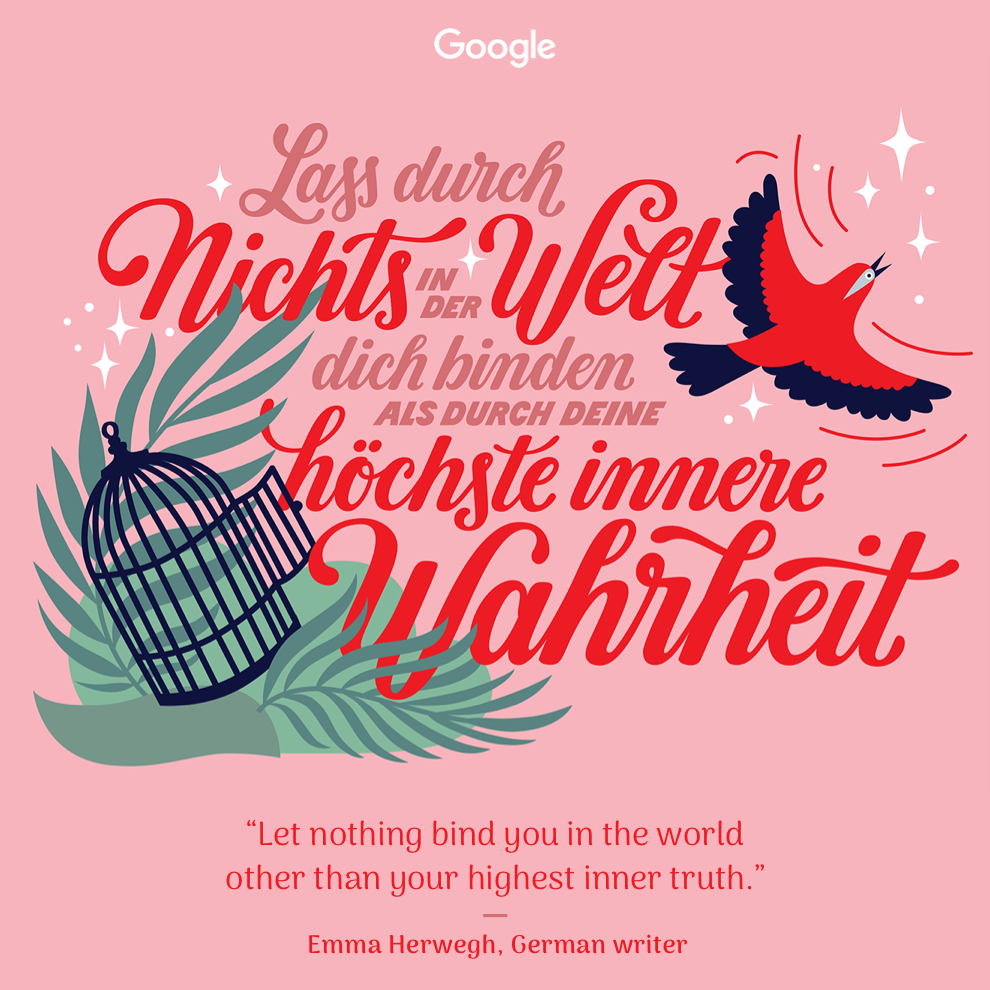 Q: What inspired the visual concept for your final quote design?

A: I was inspired by the idea of freedom, and chose a bird escaping from his cage as a symbol for the freedom of your mind.

Based in Mumbai, India, Indian paper typographer and illustrator Sabeena Karnik created the designs below. 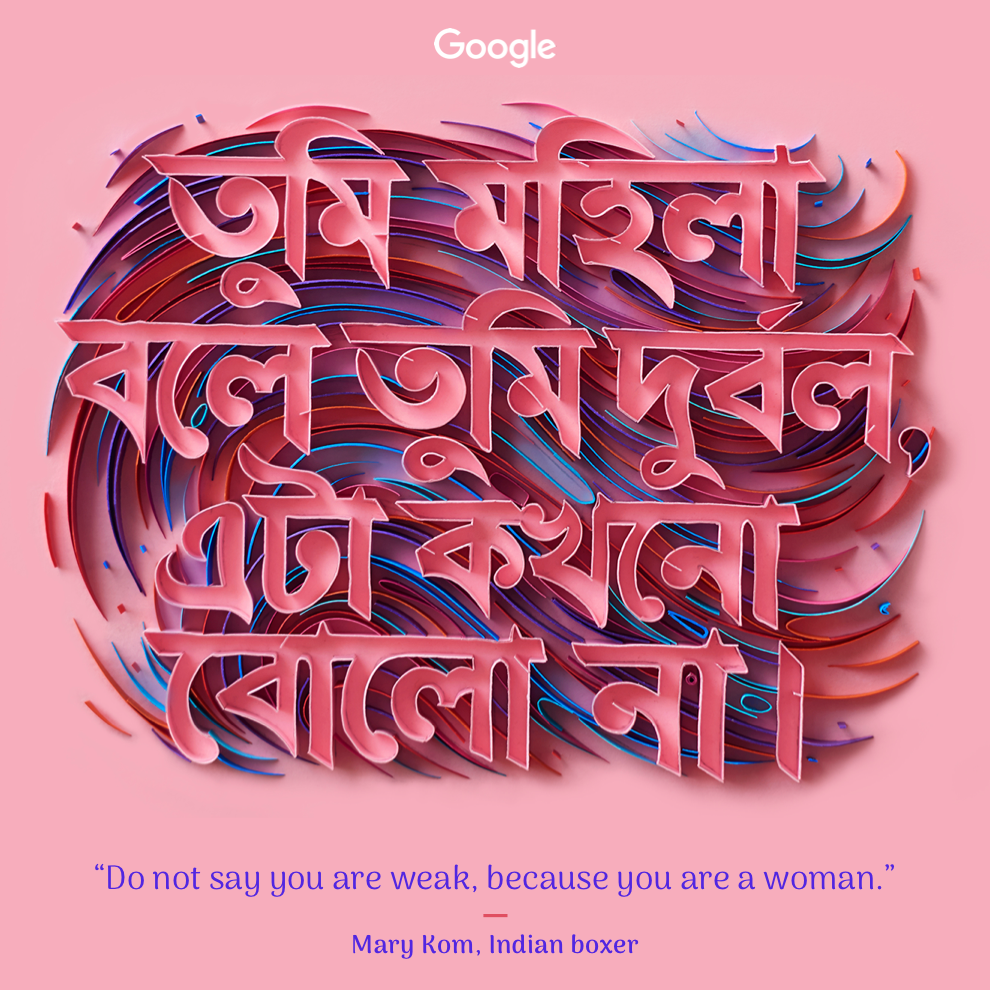 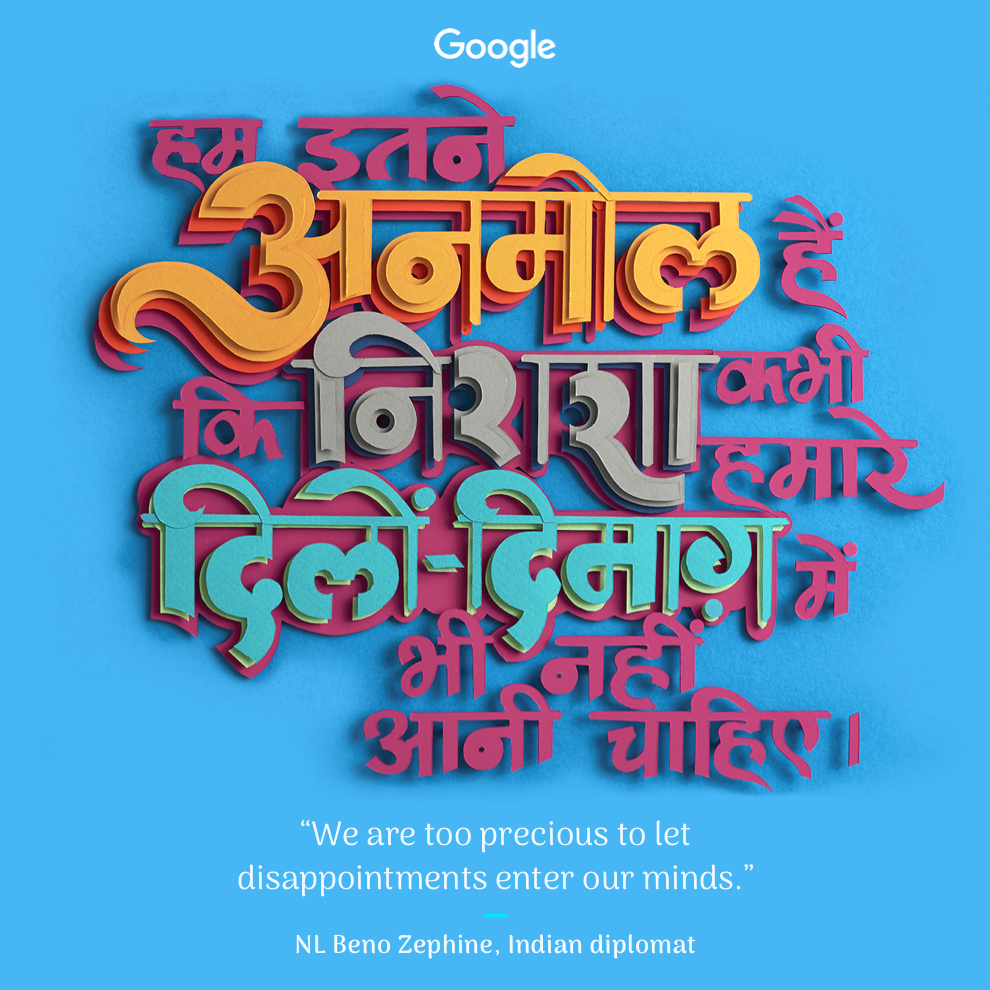 Q: How do you personally interpret the NL Beno Zephine quote you designed?

A: This quote for me is so inspiring and uplifting. These are words by Beno Zephine, India’s first visually challenged woman in the Indian foreign service. This line can push and motivate anyone to achieve their dreams just as she never stopped pursuing hers.

Based in Sydney, Australia, Australian lettering artist Gemma O’Brien created the design below. 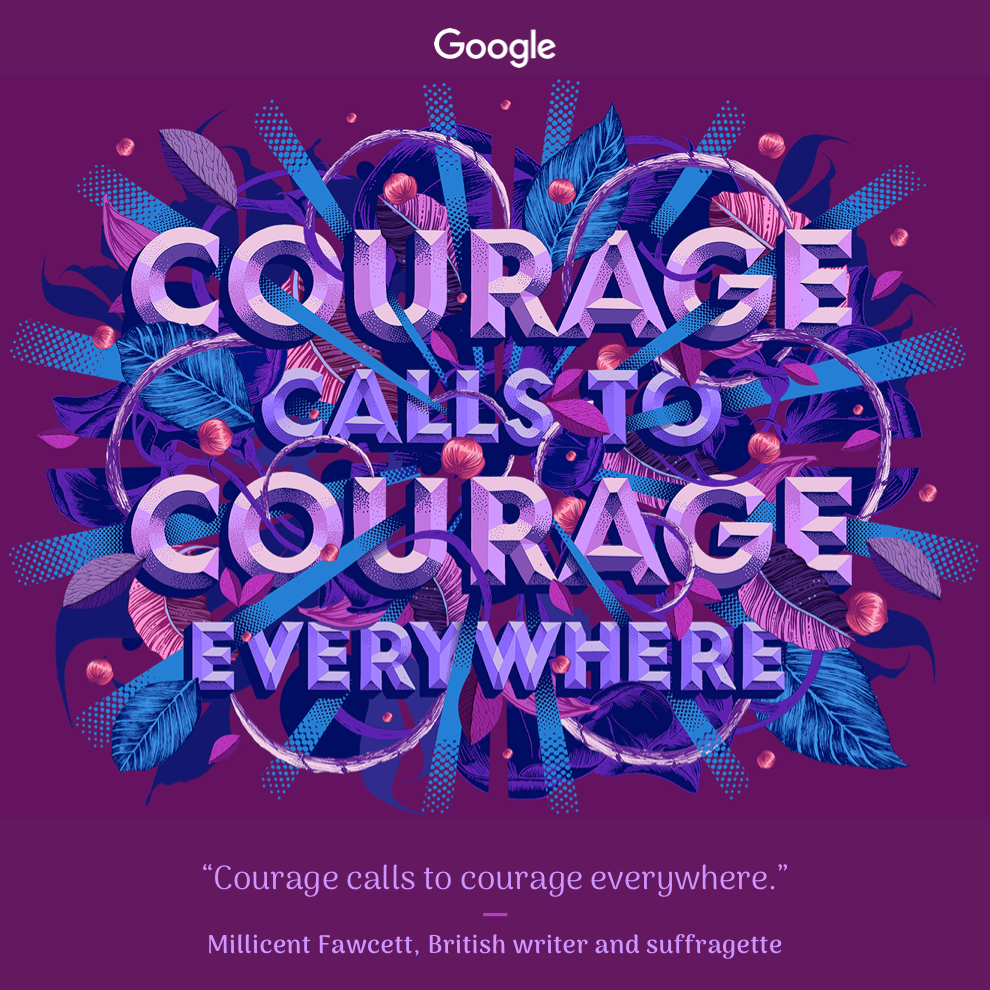 Q: How do you personally interpret the quote you designed?

A: When I first received this quote to illustrate, I immediately jotted down some words in my sketch book. They read, “One person gives another the courage to rise up. To speak out. To be vulnerable. To be strong. To speak truth. To be heard. To make change.” I think the most inspiring thing about this quote is how it applies beyond the women’s movement. It only takes one courageous person to inspire many, many more. 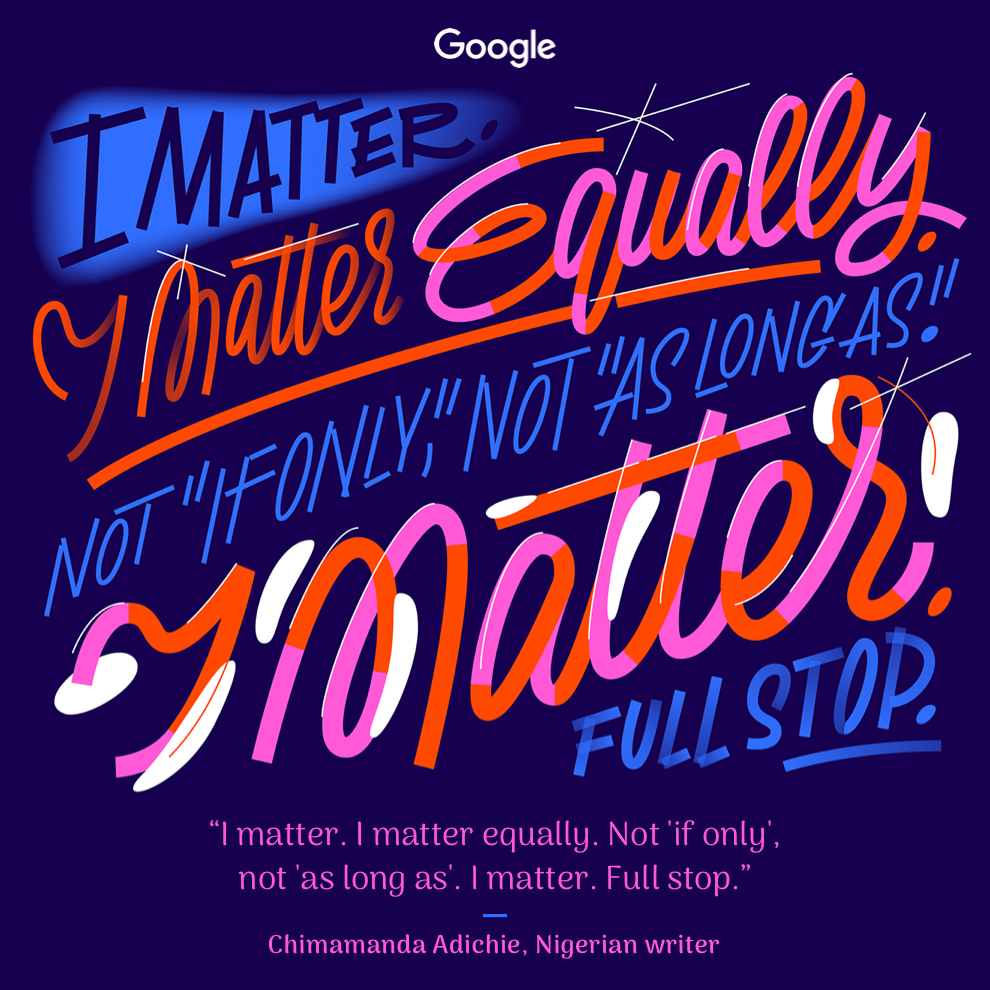 Q: What inspired the visual concept for your final quote design?

A: Through expressive and rhythmic lettering, I tried to illustrate the energy and power coming from the quote. I especially highlighted the word ‘equally’ and the last ‘I matter”, which I felt should sound the loudest. 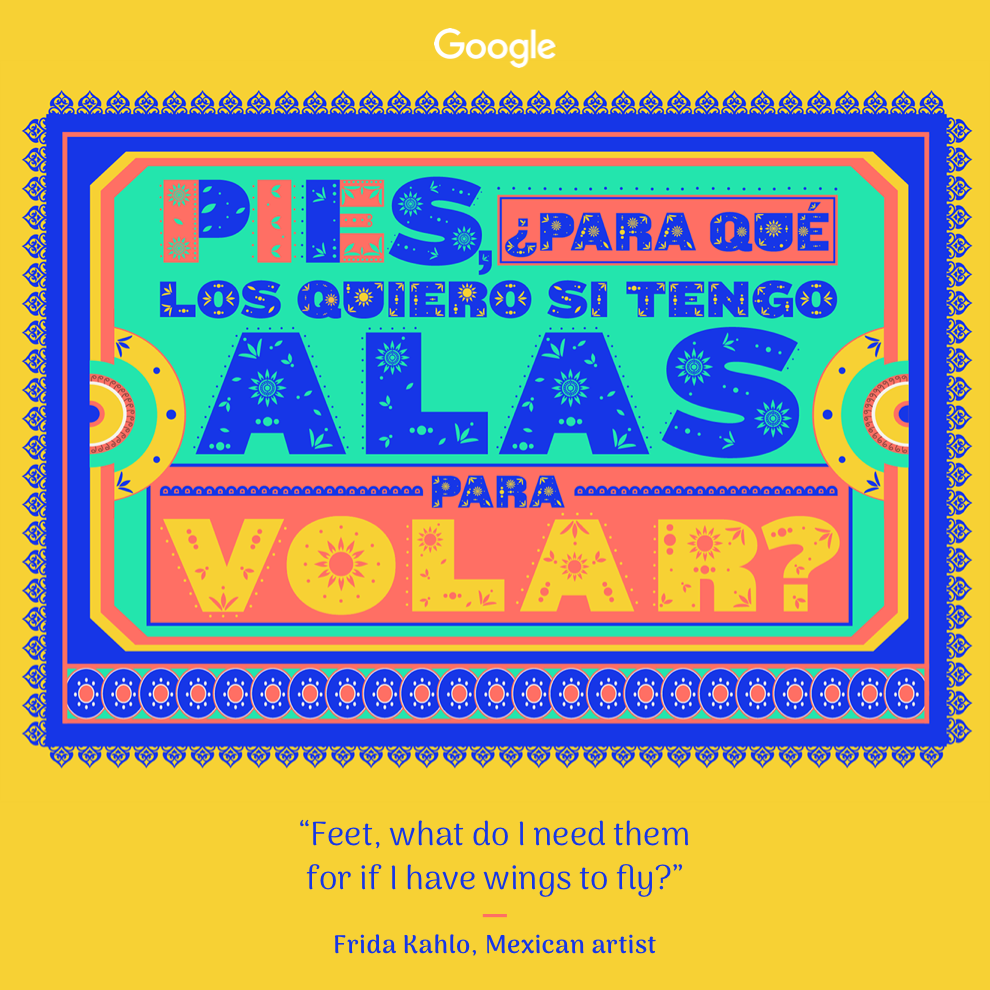 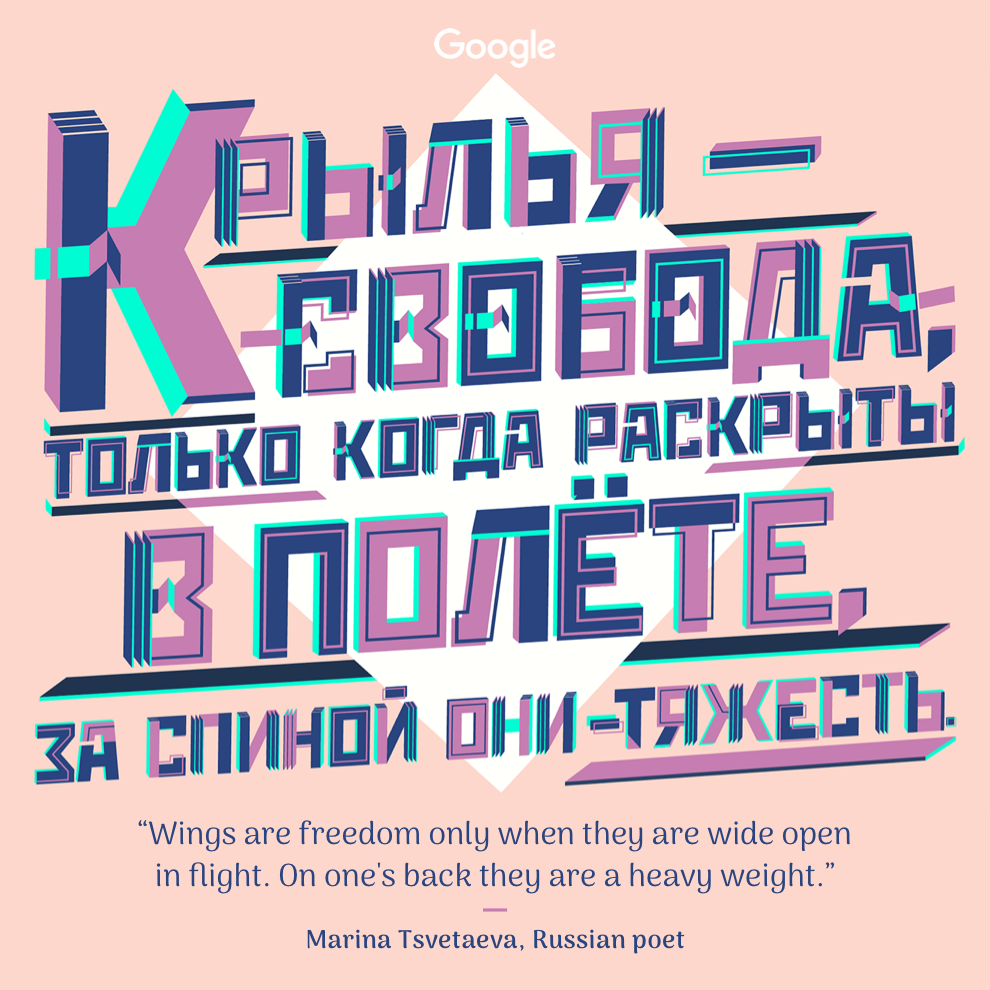 Q: What inspired the visual concept for your design of Frida Kahlo’s quote?

A: I focused a lot on the context that reflects Frida Kahlo, in Mexican ornaments and a color palette that is visually striking. I also wanted to work specifically with the yellow color, which was particularly meaningful to her in life. I read the pages of her intimate diary many times in the design process.

Based in Tokyo, Japan, Japaense graphic designer Hazuki Tamano created the designs below. 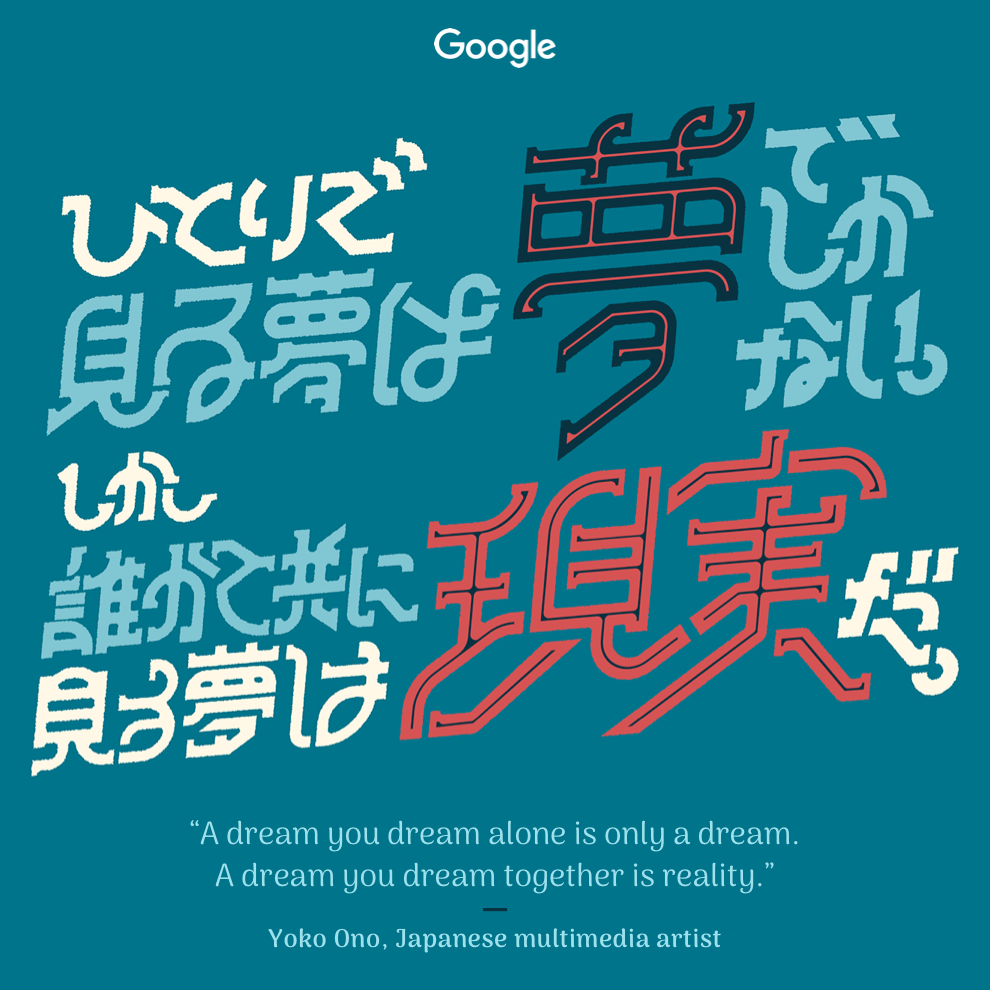 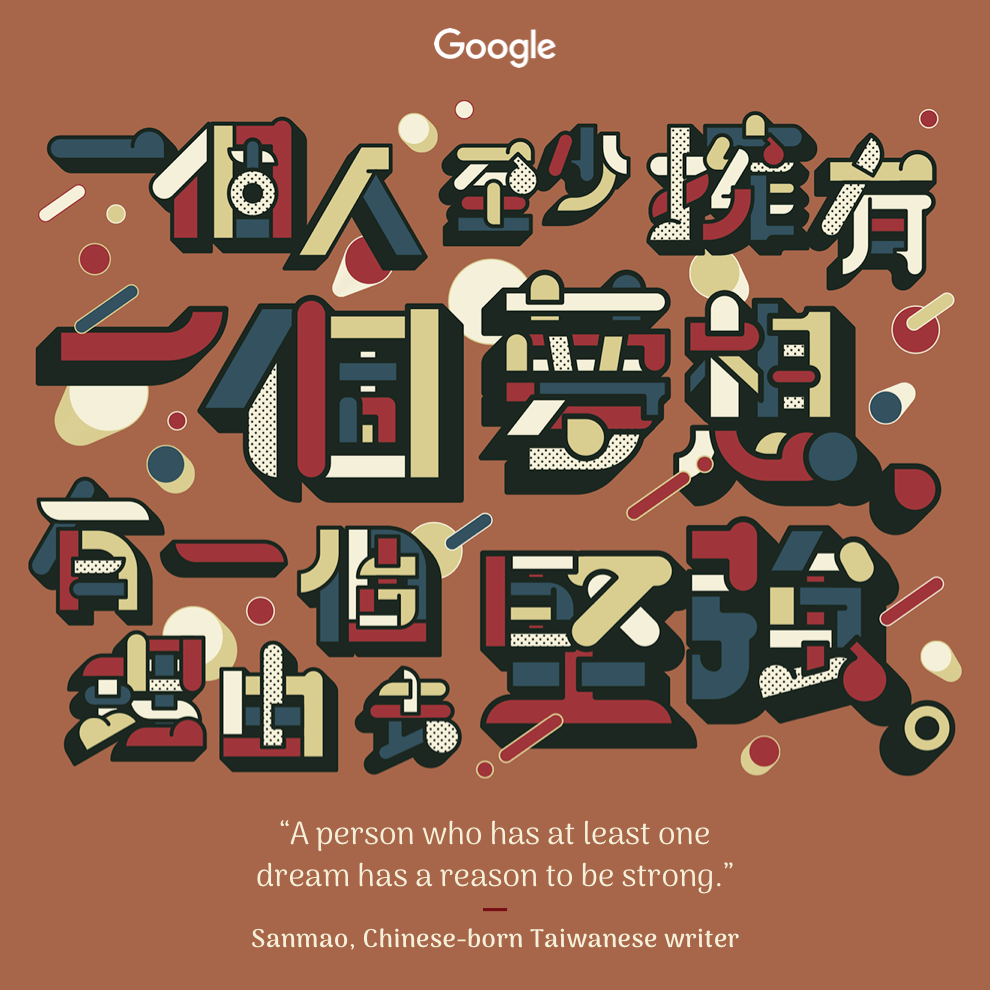 Q: What inspired the visual concept for your design of Yoko Ono’s quote?

A: I used the sky as inspiration for this piece, as Yoko Ono references it in many of her works. Red is used to accent “dream” and “reality” to represent the sun shining brightly down on us.

Gold catch at Wayanad;jewellery in Kozhikode under scanner

BJP alleges P.K Kunhalikkutty has a role in Marad case

Organ donors and recipients get together on Oct 7

Finally,gov.offices will move to KSRTC terminus?

MSF agitation against the killing of Gauri Lankesh

Onam;a fest of literature too

Dr.M.K.Muneer speaks out against female circumcision

Kayakers from 11 countries to take part in Malabar River Festival

Nurses will go on strike from June 15-UNA